For the Love of Engineering

“Engineers don’t think the glass is half empty or half full. The glass just needs to be redesigned”. They are a free thinking and creative lot.  Mr. Mosses is also one among them. He is the CEO of a software company in Dharmapuri. As a child, Mr. Mosses loved maths and liked to solve realistic as well as logical problems. Being an average student, he says becoming an engineer was a proud achievement. Although, his aim was to become a doctor, he ended up being an engineer because of life and circumstances. He claims that he did not want to work in any other city. He only wanted to work in his motherland I.e. Dharmapuri. This shows his love for his home town. He says that engineering is not about education. It is all about the self-interest of the student. That is what actually matters. He also says that the changing technology is an obstacle for his job. One should always keep themselves updated which could be difficult. He also says that there are a lot of engineers in Tamil Nadu without a job. This is because the value of engineering has decreased. This can only be solved if the number of engineering colleges are reduced. Mr. Mosses is a person who is thankful for his work and loves what he does. I thank Mr. Mosses for sharing his experience to the students of Dawn who aspire to become an engineer.

– interview and article by

B. Soumya Rani Reddy IX A

A Police woman’s pridePenned by our Students 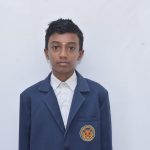 Innovating with robots:Penned by our Students