Our school celebrated the sports day on 15th August, 2019. The field was decorated with flags, festoons and bunting. Our honourable Correspondent, Shri. R. Udayakumar presided over the function.

The sports day began with the investiture ceremony of our School Student Council. The Student Council consists of the School Pupil Leader, Assistant School Pupil Leader, House Captains and Assistant House Captains. The newly elected council members were adorned with sashes and badges. They received their flags from their predecessors. This was followed by the march past and oath taking.

In kabaddi – junior level for boys, again the Topaz house won the 1st place and the Ruby house bagged the 2nd place.

Kho Kho – junior level for girls was won by the Ruby house and the Sapphire house won the 2nd place.

The Topaz house won the best march past shield amid tough competition. The overall championship award was won by the Sapphire house with 390 points. 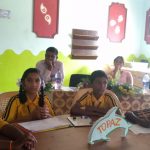